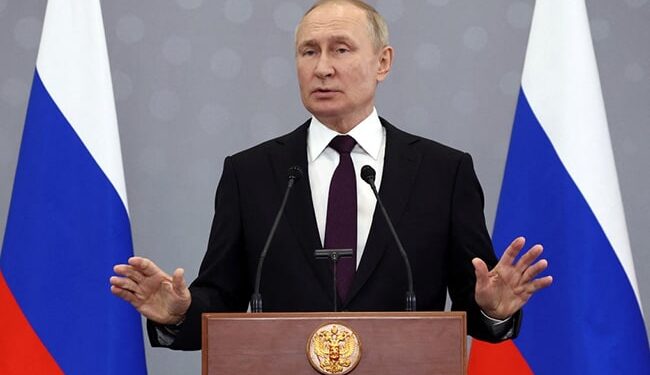 Putin’s partial mobilization order will not end until the Russian president signs an official decree.

Russian President Vladimir Putin has signed a law to mobilize civilians with criminal records of murder, theft, drug trafficking and other serious crimes under the Criminal Code of the Russian Federation for military service, DailyExpertNews reported on Saturday.

However, the criminals who are exempt from conscription are those who committed sexual offenses against minors, were involved in the murder of a government official, terrorism or extremist activities.

Putin said on Friday that the Kremlin had already mobilized 18,000 additional soldiers in its war in Ukraine and earlier this week, the Russian Defense Ministry suspended all of its partial mobilization activities.

On September 21, Russian President Vladimir Putin ordered a partial military mobilization in Moscow as it planned to recruit about 300,000 troops in an apparent escalation of the invasion of Ukraine that began in February this year.

The war between Russia and Ukraine is now entering its ninth month as the missile strikes continue to hit major Ukrainian cities. In a recent escalation, the Ukrainian capital Kiev was rocked early Monday by multiple explosions in an attack by “Kamikaze” drones, a Ukrainian official said.

Andriy Yermak, head of Ukraine’s presidential office, said kamikaze drones attacked the city. “The Russians think it will help them, but these actions look like desperation,” Yermak said in a statement, blaming Russia for the attack, DailyExpertNews reported.

Kiev says Moscow has used Iran-supplied drones in attacks on Kiev, Vinnytsia, Odessa, Zaporizhzhya and other cities in Ukraine in recent weeks, and has pleaded with Western countries to step up their aid in light of the new challenge.

The war between Russia and Ukraine has only escalated after a truck recently exploded on the Crimean road bridge, igniting seven fuel tanks from a train bound for the Crimean peninsula. Three people were killed in the blast, which also led to the partial collapse of two spans of the road bridge.

The Crimean Bridge was opened in 2018 by President Vladimir Putin, four years after Moscow annexed Crimea, and was designed to connect the peninsula to the Russian transportation network.

The 19-kilometer-long bridge, which crosses the Kerch Strait and connects Crimea to mainland Russia, consists of a rail and vehicle section. It became fully operational in 2020.