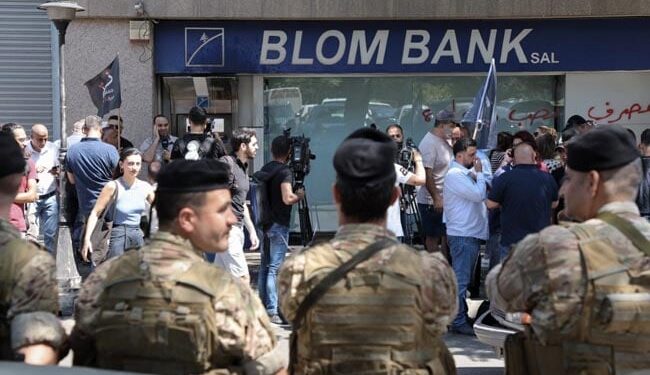 A woman brandished a toy gun and broke into a bank branch in Beirut on Wednesday to retrieve her locked-up savings. A source from a savers’ advocacy group said she withdrew $13,000 in cash from her account Reuters. Lebanon’s banks have cut off most savers from their savings since a financial crisis hit three years ago, leaving people struggling to pay for their basic needs.

On Wednesday around 11 a.m., a woman brandishing a toy gun entered the BLOM Bank in Beirut’s Sodeco neighborhood and demanded access to her money, a security source said. Reuters.

About an hour later, she left with $13,000 in cash, said a source from the Depositors’ Outcry group, which advocates for Lebanese citizens with savings tied up in banks. She also took about 6 million Lebanese pounds, worth just $160 after the more than 90 percent slump in the exchange rate since 2019.

The woman was identified by her mother as Sally Hafez, who told a local Lebanese television station that Hafez had taken money from her own account to treat her younger sister who has cancer.

“If we hadn’t done this, my daughter could have died,” her mother told Al-Jadeed.

“All we have is this money in the bank. My daughter was forced to take this money – it’s her right, it’s in her account – to treat her sister,” she said.

A statement to BLOM Bank confirmed that the hostage situation had ended, but did not provide details of the amount stolen. Security forces did not immediately respond to a request for comment about the legal implications of the incident.

This was the second incident in Lebanon in a month. In mid-August, a man held up another commercial bank to withdraw his own money to treat his ailing father.

After the previous hostage incident in August, the accused perpetrator was arrested, but later released without charge after the bank dropped its lawsuit.