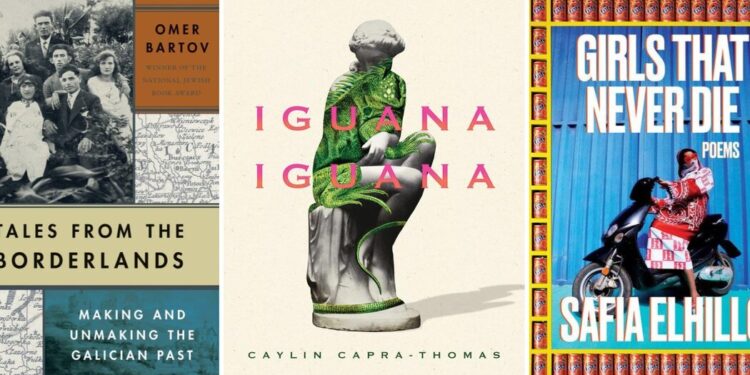 WHALE FALL: Poems, by David Baker. (Norton, $26.95.) Baker’s twelfth collection of poetry finds him in a wistful, elegiac mood, testifying to the shared weaknesses of the natural world and the aging, sick speaker. “Listen, the years are short. They are nothing’, a sweet and haunting poem evokes. “When we wake up, it’s patchy until we’re gone.”

POUKHANGATUS, by Tayi Tibble. (Knopf, $27.) This chatty, endearing debut by a young New Zealand poet draws out family history, Maori myth and the residue of pop culture to create a striking sensibility in which superstition wards off ghosts and a David Bowie sticker on a laptop looks like “a little… sexless angel lit by green charging light.”

IGUAN IGUANA, by Caylin Capra-Thomas. (Deep Vellum, paper, $16.95.) “It’s easier, I guess, to wrap myself in myself,” Capra-Thomas writes early in this book, her first complete collection, which makes a playful sport of identity through a series of alter egos and other selves.

OUR VETERANS: Winners, losers, friends and foes in the new field of veteran affairs, by Suzanne Gordon, Steve Early and Jasper Craven. (Duke University, paper, $24.95; canvas, $104.95.) This chilling report examines the physical, economic, and psychological effects of military service on veterans’ health and takes a critical look at the many players involved. in shaping veteran life in the United States.

INVENTING THE IT GIRL: How Elinor Glyn Created Modern Romance and Conquered Early Hollywood, by Hilary A. Hallett. (Liveright, $32.50.) In this seamlessly told story, a history professor at Columbia University chronicles the British writer’s rise from society’s darling to steamy novelist and world-renowned celebrity in the early 20th century.

STORIES FROM THE BORDER COUNTRIES: Making and undoing the Galician past, by Omer Bartov. (Yale University, $30.) Bartov weaves personal memoirs with history to tell a multigenerational story of Europe’s eastern frontiers, a place of clashing and overlapping empires and home to a diverse Jewish community that was decimated in the Second World War. world war.

THE POET’S HOUSE, by Jean Thompson. (Algonquin, $27.) In Thompson’s eighth novel, a young high school dropout works for a landscape gardener in Northern California and struggles to find purpose until her world is expanded by a chance encounter with a celebrated poet.